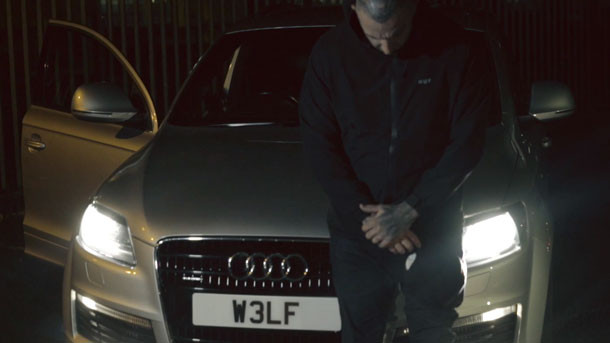 Arron Erskine – Wolf is out now! A6 Records are proud to introduce you to a new UK Grime track by Arron Erskine. The song entitled ‘Wolf’ is a bold statement (which suits the artist who also has a striking image with many tattoos one of which is a wolf on his head), and introduces him into an established but ever growing genre, but with a twist! Arron Erskine can not only write great lyrics and rap, but he has an incredible singing voice too! Something we feel is lacking in Grime music at the moment.

The music video was filmed by Kaylum Dennis who is the official music video producer for Stormzy and Section Boyz, and his work is instantly recognisable by his amazing editing and camera skills. If you were to mute the song, you would guess the genre is Grime based on how Kaylum captures visuals and uses gritty glitches and effects to keep your eyes constantly entertained.

A lot of effort and time went into the video which was shot in London on a cold winters night, and sees Arron Erskine walking and driving around London city, the heart of Grime music! We hope you like the song and video. Please give it a share to help support the journey, and keep your eyes peeled, because we’re already working on 3 new tracks coming very soon!